Continuing with the “Mordru Arises” storyline, we pick up at just the moment when Laurel and her team has doused the mystical fire created by the coven of Mysa witches, a tactic that cuts off the Mordru spell that had risen up an army made up of the remains of history’s greatest warriors. 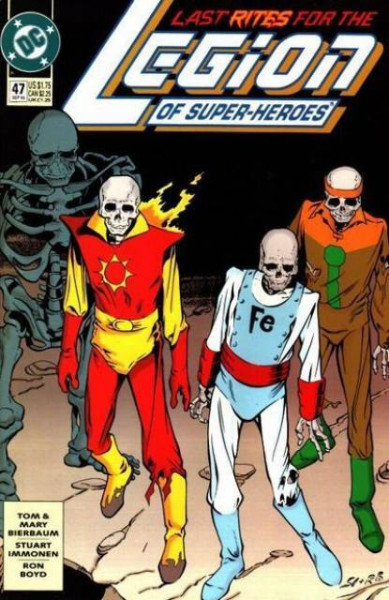 Unfortunately, the cover to #47 didn’t capture the image we’d envisioned.  The cover concept was really one of the lynch-pins of the whole overall story when we initially conceived it -- I imagined a key moment that would be a cover to one of the issues, showing skeleton versions of all the dead Legionnaires, lifeless and collapsed on the ground, with the most recognizable Legionnaires in front and then the less recognizable LSHers in the immediate foreground, and then random other members of Mordru’s fallen army filling the rest of the background stretching off as far as one could see – a macabre boneyard of fallen skeleton warriors.

I’ll start this entry with a formal obituary I wrote about Arnie, which I believe was at the request of his mother.  I don’t recall where it was intended to run and can’t find any evidence of it on the Internet, but it includes a lot of detail that Arnie’s mother was able to provide that I’d have never otherwise remembered…

Starkey was a staunch and popular participant in Legion of Super-Heroes and X-Men fandom, having contributed regularly to the amateur press alliances Interlac, X-Apa, Apa-LSH and WAPA. Immensely likable and easy-going, Starkey was often identified as perhaps the nicest fan in comics. He's also regarded as one of the bravest and most positive, having only occasionally discussed with his fellow fans the extent of the physical and medical challenges he'd coped with since childhood and that eventually took his life.

I’m many years overdue to write obits on my brother Carl and friend Arnie Starkey for the Interlac web site, which is something the late Chris Companik had asked me to do a long time ago and I just never got around to. And it occurred to me that I could perhaps finally get to it if I thought of it as something to do for my Legion-related journal and / or the apas, so I’ll jump in and try to put something together.

Carl Bierbaum was born February 8, 1961 in Dover, Del., the 10th of 11 Bierbaum children.  He was instrumental in sparking that family’s particular interest in DC Comics’ Legion of Super-Heroes when he took a liking to the group based on a “Meet the Legionnaires” feature he found in friend Stephen Funk’s British “Superadventure Annual.”  Here's a scan of the cover of that actual copy, preserved all these years by brother Jim and other Bierbaums... 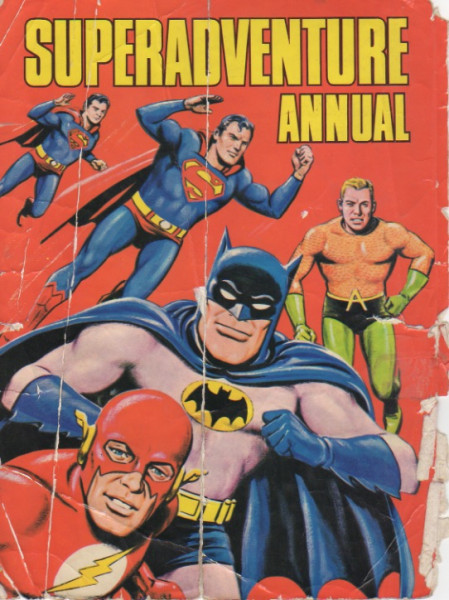 As we continue into the fourth issue of the “Mordru Arises” storyline, this is probably the issue that offers the strongest evidence that we may have stretched the story over too many issues, as some readers felt.  The cover itself doesn’t depict anything compelling unless you look closely enough to see that the current Legion is fighting the corpses of the deceased Legionnaires.  I think we were envisioning that as a pretty powerful, promotable plotline, but there’s no copy on the cover and the dead Legionnaires aren’t all that striking or identifiable.  For one thing, the costumes of guys like Chemical King and Magnetic Kid aren’t especially memorable, and Invisible Kid 1 is shown from the back and with his headband covered, so the two most identifiable parts of his very recognizable uniform aren’t visible, Blok is in his evolved form that he only had right at the end of his life, so he’s pretty hard to place, and Sun Boy is down in the corner of the cover with his back to the reader, so again, an immediately identifiable uniform looks like just a generic outfit to the buying public.  It almost seems as if there was an intentional effort to hide the traditional old-school “spandex” look of the earlier Legion. 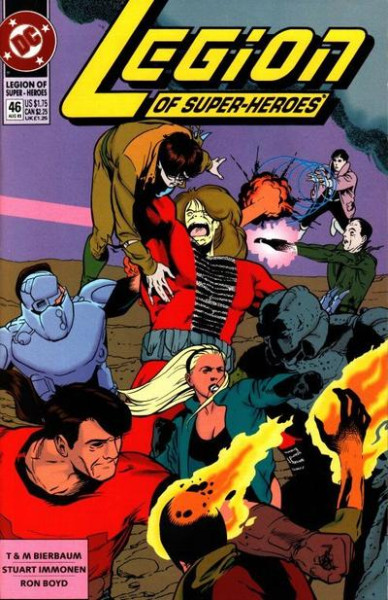 I always liked Triplicate Girl/Duo Damsel a lot.  I think when I first picked up the Legion at the age of 6, I was sort of drawn to her because she was a rare hero whose code name started with “T,” the first letter of my name.  I was also fascinated with the word “triplicate,” which I hadn’t heard before.  Later on, I found the name “Duo Damsel” similarly interesting because it was something new after all the “girls” and “lasses,” and “damsel” seemed somehow more interesting and sexier.  I may have also been attracted to Lu’s brown hair, since I always found characters with brown hair in comics to look more natural and believable than the characters with yellow and blue-black hair. 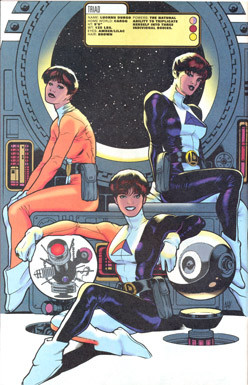 copyright DC Comics
By the time I was in my mid teens and becoming a serious Legion fan, I was getting to read a lot of the ’60s stories for the first time and starting to judge the characters through more sophisticated eyes.  And by this time, the classic Triplicate Girl was being replaced by the made-over Cockrum version and she was suddenly a very hot number, only increasing my interest in the character.  Had they not written her out of the group shortly thereafter, she might have remained perhaps my favorite among the females.  I never stopped liking her, but her days as an important character in the Legion universe really ended with the wedding in Superboy/Legion #200 almost 40 years ago.
( Collapse )

Here's another essay I wrote regarding an Apa-LSH topic of the mailing...

Ultra Boy may have been my very first favorite super-hero, because I can remember playing with my brothers and sister that we were Ultra Boy, Ultra Man and Ultra Girl back when I was probably no more than six and hadn’t yet bought my first Legion comic. In fact, what shortly thereafter motivated me to buy my first self-owned Legion issue (before I could read more than a few words within that issue), Adventure #310, was the news the Ultra Boy actually died in the comic (and somehow came back at the end, which I didn’t understand until I purchased the issue and saw the full story).

I think it was that great eagle-like emblem that sold my siblings and me on this character.  The bright red color may have caught our eye as well, and I tended to really like characters with brown hair (at about the same time, I was adopting Green Lantern as my favorite 20th century DC character).
( Collapse )

I was pretty dissatisfied with the Reflecto saga back when I read it in the 1980s because it never really added up to me why these events would have produced a Reflecto statue in the Hall of Dead Legionnaires and why Ultra Boy ever assumed that identity in the first place.

So we took it upon ourselves to build on that established story with the hopes of making it fit a little better.  Our thinking was to establish that prior to Jo Nah gaining his Ultra Boy powers, there was a planetary champion on his world who was the real Reflecto. Ultra Boy would have naturally idolized him to some degree in his youth, making it seem natural to the readers, we hope, that during the Reflecto saga, an amnesiac Ultra Boy might in his confused state take on the identity of his one-time idol.

This is issue #3 of the “Mordru Arises” storyline, and this time we see the bulk of the current Legion, freshly fortified by four new Khundish members, speeding out to Sklar to square off against the armies of Mordru, which are now over-running the unlucky worlds that are nearest Mordru’s base on Tharn, the Sorcerer’s World.

The Legionnaires teleport down to Sklar and are stunned to see rumor confirmed – that what they face is an army of the risen dead, the greatest warriors of all time re-animated by Mordru’s magic and utterly loyal to the great sorcerer.

Among Mordru’s cadaverous soldiers are various deceased characters from the DC Universe.  Through the course of the issue we get glimpses of the remains of the recently killed off version of Robin, a Hawkman, a Green Lantern, Son of Vulcan, Beast Boy, the Golden Age Flash and Atom, Mr. Terrific, the Vigilante, Mirror Master, Terra, Cyborg and others.

Here's another brief essay I wrote a little while ago as part of an "Apa-LSH Topic of the Mailing," this time about The Fatal Five...

This is, beyond doubt, one of the most important villains/villain groups in Legion history, though I suppose I’m probably a little less a fan of theirs than many are.  Any one of them individually would probably make for a great villain but as a team, I’ve found the fights against them a little unwieldy because each one of them was individually so powerful.   The fights kind of end up being involved explanation for how such powerful villains are defeated, which I don’t find especially interesting.

That said, I really did enjoy our multi-part "Legionnaires" story where we assembled an updated Fatal Five and pitted them against the young Legionnaires.  Part of the reason I liked the story was that the villains were a little handicapped with a new Emerald Empress who was decidedly a weak link, and that made the group a little less of a monstrous machine of violence and a little more interesting to me.  And it was fun to take a couple issues and throw virtually the entire Legion team at the Fatal Five.

In part two of our “Mordru Arises” storyline, we see Mysa, now merged with the Amethyst essence, locked in a violent battle with Mordru.  Through the fight, Mordru keeps stirring memories in Mysa of the torture he subjected his former wife to during their abusive marriage, pushing Mysa into a deeper and deeper rage.  I remember our editor, KC Carlson, saying some had questioned whether the fight was too long and the scenes of Mordru’s abuse of Mysa too graphic.  I couldn’t really disagree, I found those scene painful to plot and dialogue, and would have liked to have come up with a more artful and brief way to establish what Mysa had been through at Mordru’s hands.
( Collapse )
Collapse