Another entry re-purposed from a recent Apa-LSH "Topic of the Mailing" discussion: 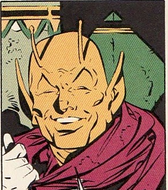 This Legionnaire (appropriately enough) feels like he's really a number of characters that periodically morph from one to the next. In the early days, he seemed as much as anything to be a quasi-comic relief character, often smiling broadly and sometimes having fun with his transformations.

Once he was established as the head of the Legion espionage squad, he started to take on more of a mysterious, cerebral feel, in some depictions being the Legion’s ultimate spy and / or detective. 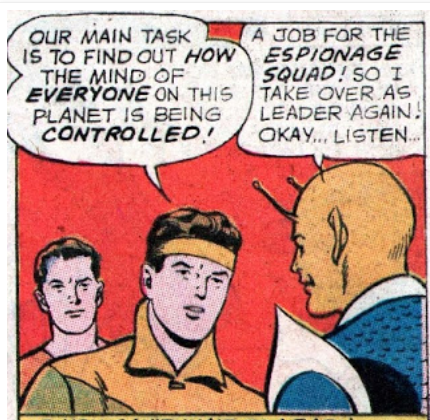 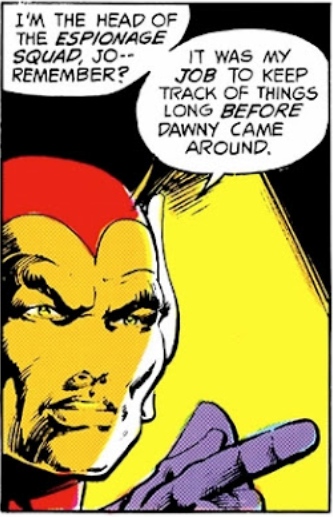 Here's a discussion promoted by a recent "topic of the mailing" in Apa-LSH...
Keith surprised me with the character of Circe, who through the first half of her story arc seemed like pretty purely evil, and then when the Dominators went into open suppression of Earth’s population and some segments of the Science Police rebelled, she couldn’t stomach seeing the officers under her command getting slaughtered by the aliens with whom she’d been collaborating. 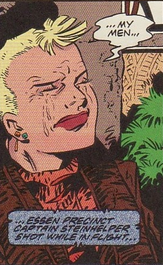 It’s real food for thought. What would (will) some of the top law-enforcement officials do if (when) Trump goes full-authoritarian. And how will they feel if / when those among them who stand up to the illegal authoritarianism become the victims of it. I would imagine most of them won’t find the backbone to join the opposition but let’s hope there are some who, like Circe, find they have limits. (Note these  musings were written well before the insurrection of Jan. 6, and worth noting that Trump did attempt to go full authoritarian and we were fortunate enough to have most police and especially the military refuse to go with him [though many of the insurrectionists were off-duty policy and former military]...) 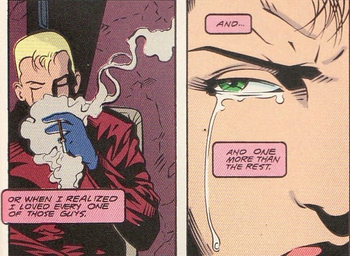 I was similarly surprised Circe discovered such profound feelings for Dirk, who always felt to me like he was merely her puppet rather than someone she had any emotional attachment to. I suspect the character herself didn’t know what Dirk meant to her until events plunged Dirk into horrific torture. My guess is Circe’s ultimate euthanasia of Dirk and her own suicide were motivated as much by guilt as actual love. As amoral as Circe had lived her life, she discovered that she did stand for something – loyalty to those she’d served with and commanded – and ultimately, her corrupt collaboration with the Dominators had brought devastation to the one thing that really mattered to her.

Continuing with my apa recollections of working on the "2995" Mayfair Sourcebook...

We were writing this Sourcebook just as the “Legionnaires” series was coming together, so in its own way, this group could have merited as much attention as the “mother-book” team, but realistically, it was too early to get very deeply into the kid team. In fact, I believe when we started the Sourcebook, the “Legionnairres” series was still planned as the retelling of the original Legion’s formative years as altered by the new Glorith-created timeline that emerged after issue #5. 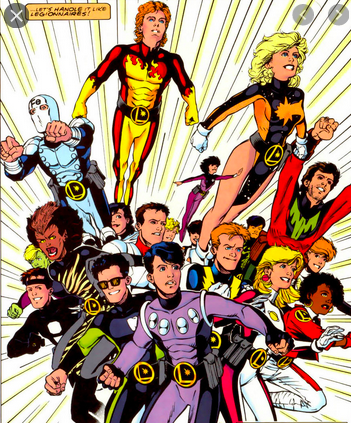 Continuing with my recollections of our work on the "2995" Mayfair Sourcebook with an entry on the equipment used by the "Five Years Later" Legion... 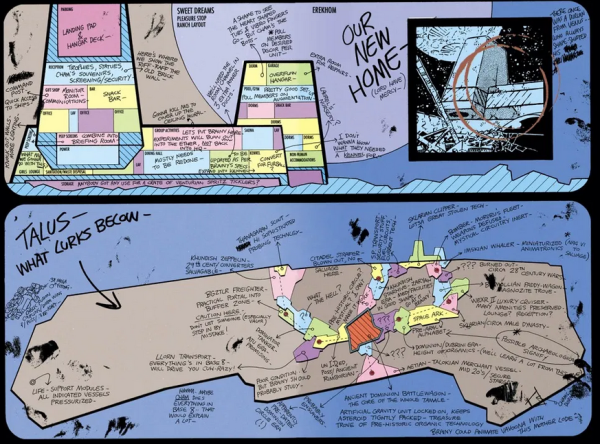 This section begins with some detail of the Legion’s HQ on Talus, the asteroid made up of smashed together space ships that have gathered in a gravitational nexus over many eons. We get a transcript of a very irreverent tour / introduction to the facility from a holographic projection of Loomis (Rokk’s army buddy who served as kind of the Legion’s jack-of-all-trades as they set up the team’s new base).
( Collapse )

From a recent Apa-LSH topic of the mailing, some thoughts on Chuck Taine, Bouncing Boy... 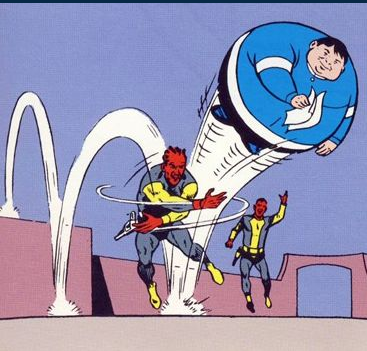 I suppose if I could go back in a time machine and advise the early creators of the Legion, I might council against the inclusion of Bouncing Boy on the team, because perhaps my earliest memory of the Legion at about the age of 6 was learning that one of their members was Bouncing Boy and thinking how dumb that was. And I’d imagine a big part of the reason I didn’t really become a big Legion fan until brother Carl discovered the group 10 years later was the way Bouncing Boy undermined my respect for the group. 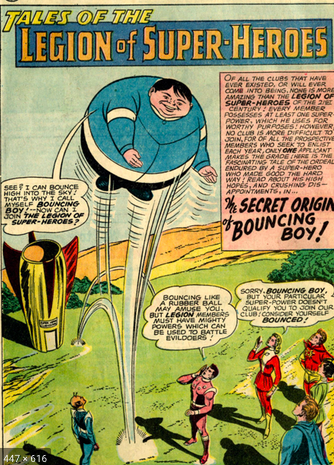 I'm once again taking comments I made in response to a past topic of the mailing in Apa-LSH and posting them here, this time addressing the First Family of the Legion, the Ranzzes, and their home world of Winath. 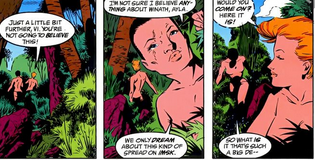 Through the 5YL run, we depicted Winath as a pretty idyllic world with a happy, nurturing culture and a general public acceptance of nudity and near-nudity. Over the years I’d kind of assumed Mary and I must have been the ones to come up with the nudity part, but upon re-reading the run a few years ago, I was reminded that Keith had shown Ayla and Vi wearing nothing but little loin clothes earlier in the run and I think there was some similar content late in Paul’s run, so our depiction of everyone wearing not much in the Reunion issue was in fact consistent with what had been recently established. 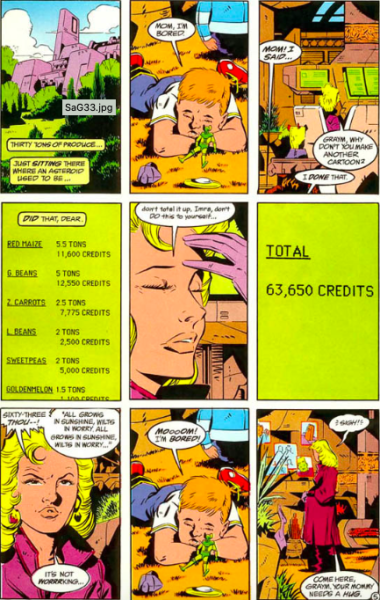 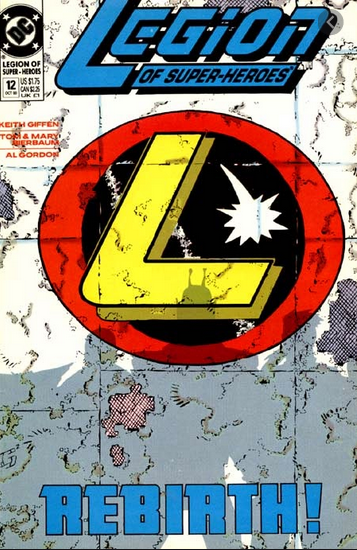 One of the contributors at the site “Legion of Substitute-Podcasters” was researching the 5YL run in advance of their segments on those issues and noticed I’d never posted an entry covering #12 on this website. I was sure I’d just somehow forgotten to post what I’d written up for the apazines, but when I dug through the old Word documents I discovered to my surprise that somehow I’d just managed to never cover #12 when I addressed those early issues many years ago.

So, better late than never, I’ll backtrack and cover #12 here and now.

And since I haven’t looked at the #11 and #13 for many years, this will be an interesting look at how the issue reads “cold,” to someone who’s not up-to-date on what’s happening in the complicated 5YL storyline.

The #12 cover is probably one of the most remembered and popular of the run, showing a prominent Legion symbol, with the shadows of some of the members being cast across the symbol and the caption “Rebirth!”

The issue opens with Brainy musing about the meaning of life and more specifically the meaning of death, as he gives up hope that he can save the critically injured Celeste and deals with the (apparent) death of Jo during the prior issue. 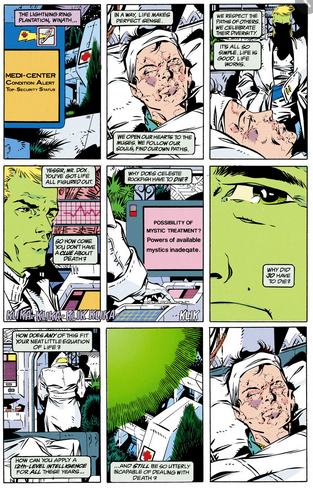 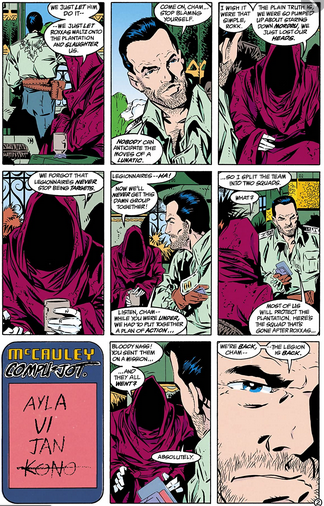 We come to end of our brief, unforgettable run on “The Heckler,” though the issue didn’t start out as the finale. As had occurred when the “5YL” Legion began and Keith was penciling, the book tended to fall behind schedule, and while “Heckler #6” was in the process of being penciled, more sales figures were coming in and the advisability of continuing the series was diminishing (if we’d been smart, we’d have rushed through as many issues as possible before they had the data in hand that mandated cancellation). 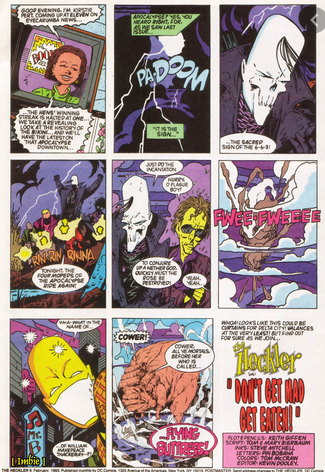 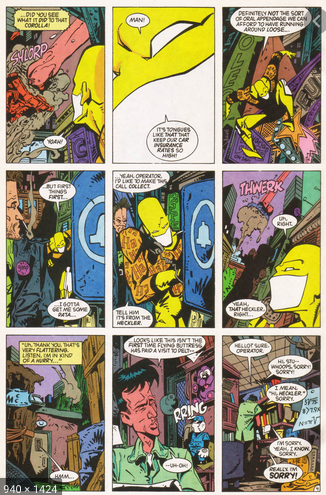 So as Keith was penciling about the last third of the issue, it turned into the finale. But never fear, the series wrapped up in a characteristically deranged way – in part because of the U-turn necessitated in the final pages by the realization that this would be our series-ender.

Continuing with my recollections of writing our "2995" Mayfair Sourcebook, we move into a section that covers the Substitute-Heroes who joined the Legion in its final days during the Five-Year Gap.

FIRE LAD: His entry begins with a “Friends of the Legion” listing in the teen fan "magazine" “The Legion Groupie” in which we learn Staq's favorite Legionnaire is, logically, Sun Boy (it’s interesting and telling that the poor Subs are treated in this fan forum not as heroes in their own right but as fellow fans of the main team). My favorite little playful touch to this profile is that one of Fire Lad’s favorite hobbies is glass-blowing. 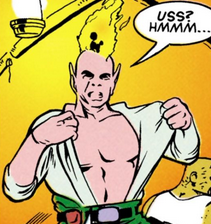 During the five-year gap there’s a news account of a run-in Fire Lad has with the corrupt Science Police Earth in which some trees get set on fire by Staq’s “involuntary nasal discharge” (police-report lingo for a “sneeze”).

Here's another discussion motivated by a "Topic of the Mailing" in Apa-LSH...

To those who think comic-book concepts ought to follow a set of neatly defined rules of good dramatic storytelling – especially that every character you introduce should have a specific dramatic purpose in the story -- the Legion's cast of dozens of heroes must be intolerable. So I can only relish the indignation such critics feel when the Legion piles on top of its crazy overabundance of heroes the Substitute-Heroes, the Academy members, the Heroes of Lallor, the Wanderers, rejected applicants, the Science Police, the families and relatives of the heroes, U.P. officials, media figures, etc., etc. (and we haven’t even mentioned the 31st Century’s rogues gallery).

In our time, we were lucky to have a lot of resources that kept us aware of established supporting cast members, so, as with villains and planets, we did very little ourselves in terms of making up new supporting cast and largely brought back characters from the past. 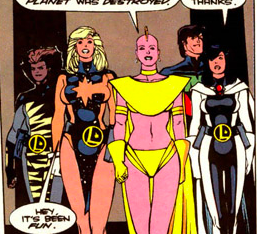 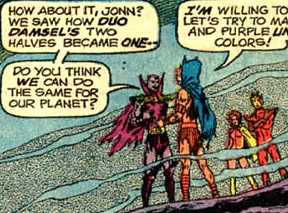